Planning your family’s financial future after a life-changing accident 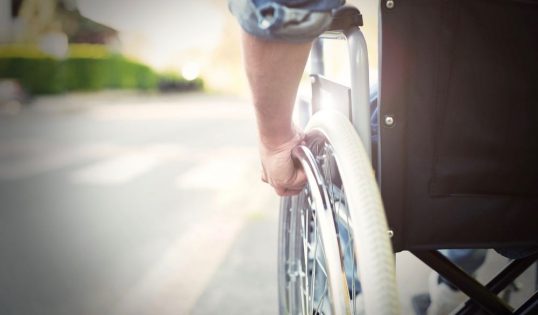 Edward Morrison was engaged to be married and a competitive district footballer when he was paralysed in a car accident. At the age of 25 his life changed forever.

The owner-operator of a northern beaches roofing business prior to the accident, Edward was now immobilised from the waist down. Aside from the need for a long stay in hospital and an even longer rehabilitation to transition to life with a spinal cord injury, Edward was no longer able to do the work required to run his business.

Spinal cord injury has life-changing health, social and financial consequences for individuals, their families and the broader community.

Getting the right advice
Edward claimed on his green slip insurance. The process took two and a half years, but at the end of it he received an injury settlement of $1.8 million.

During that time, Edward and Sarah married. Now in their late 20’s, they wanted to start a family and plan for their financial future. Edward was particularly concerned to make sure that he would be able to support his family, so they sought the expertise of Nick Lloyd, a financial planner Edward had known socially since childhood.

The financial planner’s perspective
As well as the physical and psychological impact on Edward from his injuries, there is also a heavy burden on those who support and care for them. As a result, it’s essential to be able to make successful insurance claims.

‘When it comes to insurance payouts, we want to make sure that our clients get everything they’re entitled to,’ Nick says.

When Edward and Sarah first came to see Nick, Nick asked Edward to bring along his superannuation statements. Like most young men, Edward had worked several different part-time jobs, each with its own superannuation fund.

One day while doing the due diligence to consolidate them into one fund, Nick found that one of Edward’s old super accounts had a Total and Permanent Disability (TPD) policy on which he was eligible to claim.

When Nick went through Edward’s whole folder all the way to the back, he discovered another TPD policy that he’d rolled over to a third fund for another $75,000. It took a little more work to claim it, but Nick proved Edward had paid for the policy and the insurer paid it out.

Investing an insurance payout for income
‘When you have an investment portfolio with an income stream, you can take out income year after year regardless of what happens in the markets,’ Nick explains.

‘For Edward and Sarah it’s a process of ensuring we invest their insurance payout to generate an income stream that will support his family for the rest of their life.’

Part of Nick and Shereen’s expertise is responding to changes in superannuation rules that will affect their clients’ tax position.

Changes announced in the May 2007 budget, for example, meant that Edward’s family didn’t need their family trust any more.

‘By moving the money from the trust into their self-managed super fund, we saved them the costs of accounting and tax returns on the family trust. And we got a superior tax result because inside super the income was tax-free,’ says Nick.

Investment income not affected by the Global Financial Crisis
Edward’s insurance payouts were invested just before the GFC. But despite the global market meltdown, the investment strategy Nick and Shereen had recommended and implemented for Edward and Sarah did not change.

‘Through the GFC we were able to maintain the value of Edward and Sarah’s pension income, even as the value of their share portfolio went down,’ Nick explains. ‘We kept the focus on generating the income stream that would support the family.’

Expanding investments for a bigger family
In the decade since his payout, Edward and Sarah have done well with their investments. They were also keen on buying some US shares, and sought Nick’s help to do that. They’ve also bought two geared properties in their SMSF. Nick provided the strategic advice on setting up the right structures, arranged the lending and liaised with their solicitors and accountants to ensure everything was in order.

‘If our clients want to do something, we figure out a way to help them do it.’

‘The other thing we do is to counsel clients about what is and is not possible, investment-wise,’ says Nick. ‘Sometimes people forget that you need reliable cash flow to make certain types of investments. When you’re in pension phase, it is important that there are liquid funds available to pay pensions, you can’t have everything tied up in an illiquid investment’

The difference a financial plan makes
Nick is delighted to continue to work with Edward and Sarah after more than ten years, and to regard them as friends.

‘We’ve helped them to take away the financial stress. Despite the accident, they’ve been able to start a family and maintain a good standard of living,’ Nick says.

‘We created options for them. Whether it’s been investing in international shares or investing in the property market, it’s been about finding ways to make it happen.’